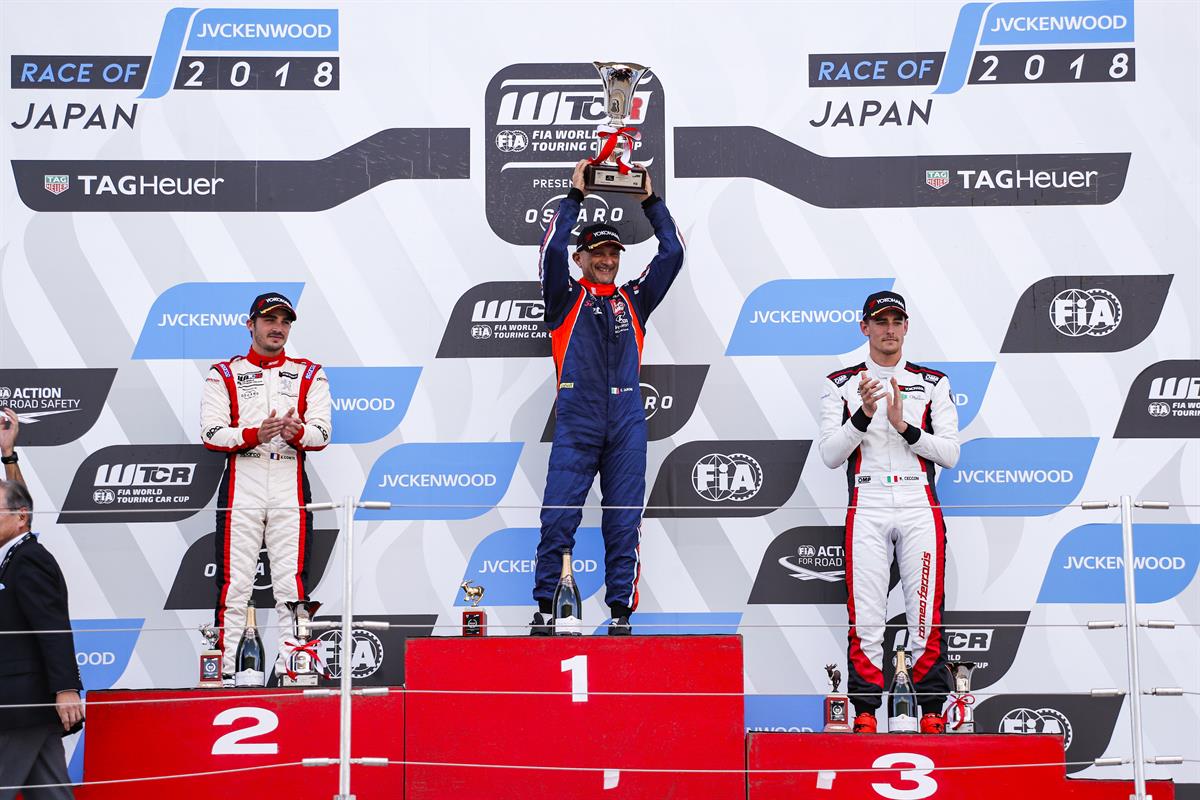 With only one weekend of the inaugural FIA ??World Touring Car Cup (WTCR) season remaining, BRC Racing Team driver Gabriele Tarquini increased his chances of lifting the title. The Italian was the only one of the championship contenders to score points in each of the three races at the Japanese circuit of Suzuka. He completed the weekend with his fifth win of the season at a crucial moment in the season.

There are now 39 points dividing Tarquini from the closest of his pursuers. A maximum of 87 points remain to be won at the season finale in Macau, from November 15th to 18th. However, a measured approach should allow him to take the title, his second world crown, and a well-deserved reward for BRC Racing Team.

The teams’ standings are again headed by the squad led by Gabriele Rizzo, with eight points in hand over their nearest challengers. As well as Tarquini’s performance, the team was boosted by a strong outing for Norbert Michelisz.  The Hungarian made a return to the podium with a third place finish in Race 2, while Tarquini followed close behind in fifth having started eighth on the reverse grid.

The strong pace of the i30 N TCR put both men in good positions on the grid, with Tarquini using his slot on the front row to move into the lead of Race 3 from the very start. Though he was passed in the race, a 5-second penalty for his rival made certain of a timely victory for the Hyundai driver.

Gabriele Tarquini said after Sunday’s challenges: “You can see the smile on my face! I made a fantastic start both in Race 2 and in Race 3, and this was the key to my success. In the last race, I was thinking about the points for my fight for the championship. The speed of the car allowed me to be very close to the leader of Race 3, and the 5 seconds penalty imposed on him allowed me to score an important victory. Now we’re going to Macau, a circuit where I have not raced there for three or four years, but I remember it very well. It will be a special and challenging weekend for everybody. I’m in the the best position to approach the final races, but it’s a lottery and anything can happen. I will be there with a smile, thinking about my title dream”.

Norbert Michelisz said: “I was happy with the car straight away early in the weekend, and we did good steps to fine tune it through the sessions for the races. To be on the podium in Suzuka was a fantastic feeling, and although the races were quite tough I enjoyed the fights. It’s a great result for the team too, to be back in the championship lead with only one round to go. Now all of my focus goes towards Macau, since I would like to end the season on a high”.