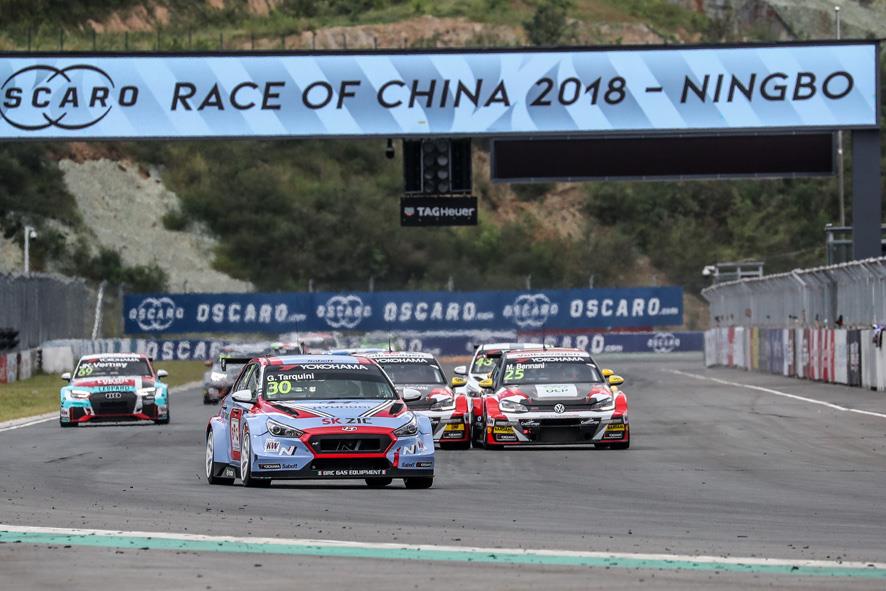 BRC Racing Team took a positive result from the Ningbo International Speedpark, the first of the two back-to-back race weekends in China. Gabriele Tarquini remains at the top of the drivers’ standings, stretching his advantage over his nearest challengers to eight points. Norbert Michelisz sits in fourth place, while the team is now second in the general standings. However, both titles remain wide open, considering the maximum 261 points remaining for drivers over the 9 races still to come.

The Hyundai i30 N TCR was once more among the fastest cars on the track, running at the front of every session over the weekend, although some unfortunate episodes affected the overall results for the BRC Racing Team duo.

Despite a grid penalty following the races in Slovakia Gabriele Tarquini concluded an excellent Race 1 in fourth place. Michelisz, meanwhile, showed great pace in qualifying to line up third on the grid. However, a minor problem forced him out of the race.

Sunday morning’s qualifications saw Michelisz at the front of the field again, taking second position and Tarquini fourth due to a minor mistake on his lap in Q3. Due to the grid inversion of the top 10, in Race 2 the Hungarian started ninth and the Italian seventh. Michelisz crossed the line in ninth, though a five-second penalty given after the race would leave him outside the points. Worse still, early contact with a competitor forced Tarquini onto the sidelines and left the team with work to do in the 15 minute repair time to prepare his car for the final race.

On the opening lap of Race 3 the two BRC drivers reversed their positions, with Tarquini taking advantage of a fast start to move up into second, while Michelisz settled into fourth. After nine laps the race was interrupted because of a dislodged curb, and following the restart the two drivers maintained the positions until the last lap, when Michelisz lost out, dropping to fifth.

Gabriele Tarquini says: “The toughest challenge was just to survive with a five-place grid penalty for Race 1. But I finished fourth so it was a very good Saturday for me. Unfortunately, the second race was not as good as the first one. I had a big accident because there was a big fight in front of me and a car stopped in the middle of the chicane. I broke the intercooler and the race was over for me. Fortunately, the mechanics were fantastic during the repair time and, in the end, the car was perfect. The third race was very good for me because I gained two positions on the first lap. I’m happy with the second place, and the championship lead ahead of the races in Wuhan”.

Norbert Michelisz comments: “I’m obviously disappointed with the outcome of the weekend in Ningbo, since I went there with the aim to score a lot of points and to finish on the podium, but unfortunately wasn’t able to achieve that for different reasons. However, I now have to look ahead to the races in Wuhan next weekend, so it’s important not to lose focus in the fight for the championship”.

After the 3 days of Ningbo, the team and the drivers remain in China for the upcoming competition weekend, for the debut on the city circuit of Wuhan from October 5th to 7th, with the wild card of the track, unknown to the two drivers.