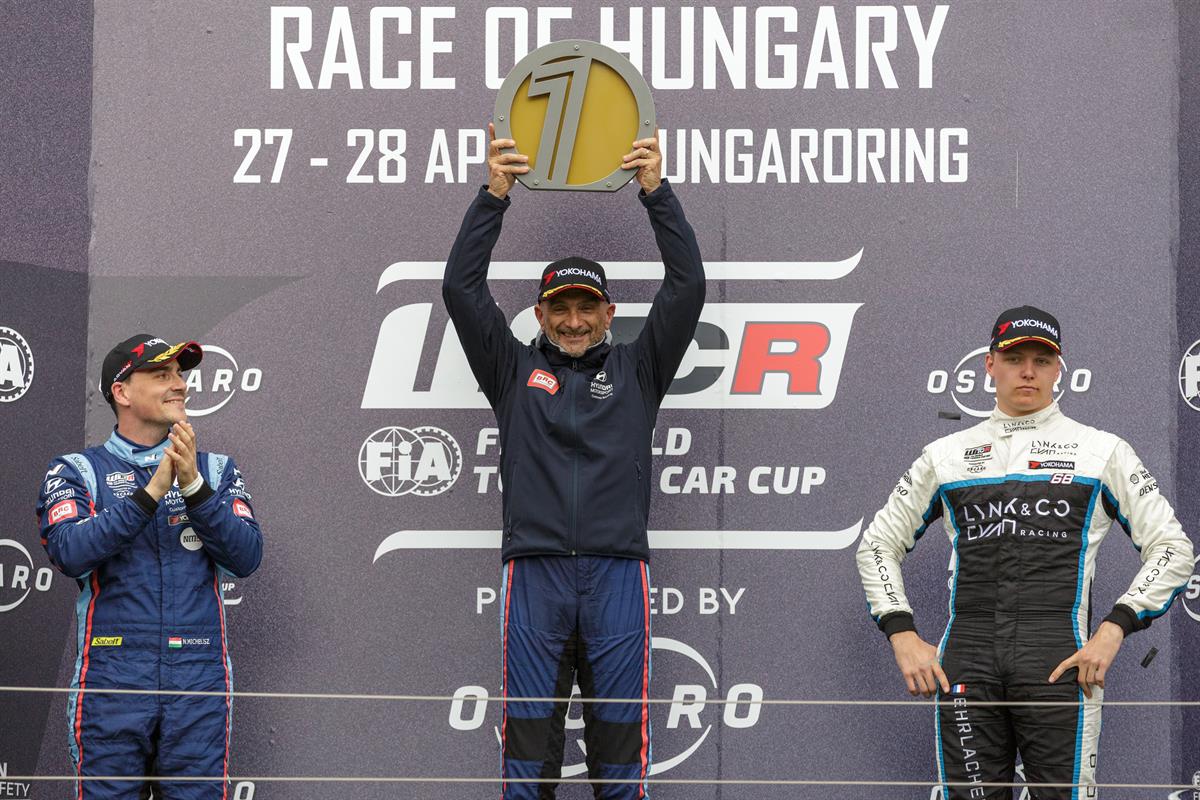 BRC Racing Team is celebrating adding a pole position and a double podium in Race 3 to its name at the second round of the 2019 WTCR – FIA World Touring Car Cup season, the Race of Hungary.

After a difficult running on Saturday, Sunday proved a return to form amid the mild and wet weather conditions at the Hungaroring. BRC Squadra Corse driver Gabriele Tarquini powered his i30 N TCR to victory in the third race in Hungary, netting his second win of the season.

His teammate Norbert Michelisz snatched a spectacular pole position in front of his supportive home fans by a mere 0.008-seconds. He started Race 3 on the front row of the grid, but lost ground at the start of the race. A safety car in the closing stages brought pressure from behind, but Michelisz was able to stay ahead and secure a podium finish.

The team has further consolidated its third position in the teams’ standings with 127 points to its name. Tarquini and Michelisz lie 4th and 8th in the drivers’ championship respectively.

Gabriele Tarquini said: “Second race of the season, second win! Norbi was really unlucky at the start of Race 3, but the pace of the car was fantastic. I very much enjoyed driving it. We made some setup changes to the car on Sunday and it was much more competitive. Thanks to the team for their hard work this weekend!”

Norbert Michelisz said: “Fantastic day for us, finishing P1 and P2 in Race 3. I was hoping the positions would be in reverse order but you can have worse in life than finishing on the podium in front of your home fans. My thanks to the team. I hope we can keep this pace and momentum up for the coming races.”

BRC Hyundai N LUKOIL Racing Team driver Augusto Farfus was consistently inside the top ten in all but one Race of Hungary session while fending off some intense battles on-track.

His teammate Nicky Catsburg struggled to find pace on Saturday, but on the Sunday utilised the mixed conditions of the track to make up a number of places in both races to finish in the points.

Their combined result scored important points for the team, which now sits seventh in the championship. Farfus is 11th in the drivers’ standings with Catsburg now in 17th.

Augusto Farfus said: “A positive second round for me. Yesterday was tough for us but we were in the top ten in all three races. I’m still learning the car and the championship. The result wasn’t exactly what I wanted from the weekend, but we have done a big step since Marrakech.”

Nicky Catsburg said: “I’m pretty happy with the result. The beginning of the weekend was really tough for me, but today we scored some good points. It was unfortunate not to be in the top ten in today’s qualifying and I started both races in P13, however I must say they were a lot of fun.”

Team Principal of BRC Racing Team Gabriele Rizzo said: “We are delighted with our result today in Hungary! A pole position for Norbert in front of his home crowd is something very special. The conditions added unpredictability into the proceedings, so we were delighted with our 1-2 on the podium. Augusto and Nicky did well to bring the car home in the points, bringing our tally of top ten finishes this weekend to eight. Our engineers made adjustments to our setup on the i30 N TCR overnight, but it proved to be worthwhile and the pace of the car today has been fantastic.”