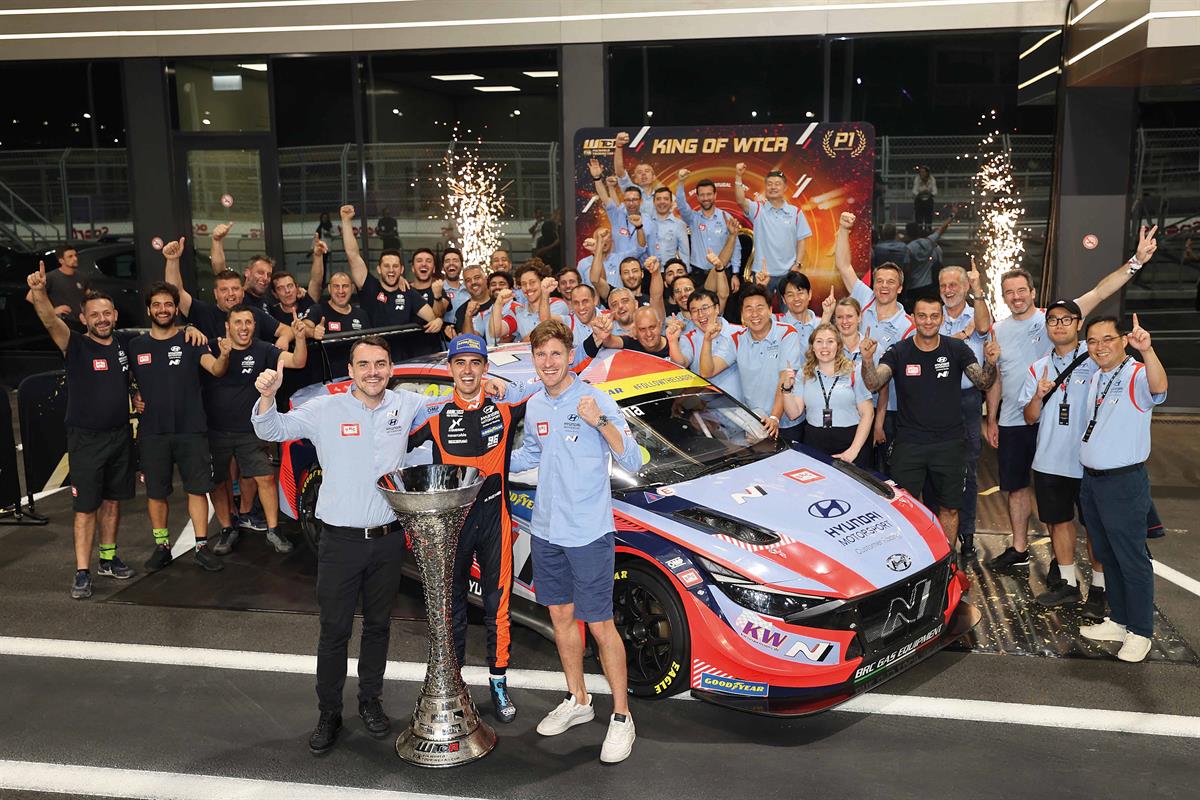 BRC Hyundai N Squadra Corse driver Mikel Azcona took the crown in qualifying at the 3.450km Jeddah Corniche Circuit. The Spaniard took the third fastest lap on Saturday evening, putting himself on the second row for Race 1. As he finished more than six points ahead of the second placed driver, it was confirmed that Azcona has done enough to wrap up the title early in the weekend.

Azcona succeeds his teammate Norbert Michelisz and Team Manager Gabriele Tarquini as winner of the drivers’ title and becomes the first Spaniard to be crowned King of WTCR.

BRC Hyundai N Squadra Corse arrived at Race of Saudi Arabia leading the teams’ title, and after Michelisz and Azcona set the second and third fastest laps respectively, it was also confirmed that the Italian outfit had succeeded in winning the teams’ title for the first time. BRC Hyundai N Racing Team driver Nicky Catsburg set the seventh fastest lap, earning himself a second row start for the reverse-grid Race 2.

Race 1 was an intense battle for all three Hyundai Elantra N TCR drivers, attacking and defending from other cars throughout the entirety of the 30 minutes + 1 lap. Michelisz took his third podium of the season, finishing in second. Meanwhile, teammate Azcona engaged in an entertaining duel for fifth place after dropping three positions in the opening lap. The Spaniard ultimately crossed the line in sixth. Catsburg was able to keep his cool while defending his position all race to finish where he began the race, in seventh.

The team’s podium trips would continue into Race 2 after Azcona made up five positions during the length of the race to finish in third. Michelisz was on an overtaking streak, also making up five positions to finish fourth. The two BRC Hyundai N Squadra Corse drivers were unable to make up any further places after the race ended under safety car conditions. Catsburg had a less fortunate race, battling for second place in the early laps, before being wiped out by the car behind. The Dutchman was able to bring the car into the pits before retiring early.

At the end of the weekend, BRC Hyundai N Squadra Corse would finish 156 points ahead of their nearest competitor, Azcona 83 points ahead, confirming his dominant performance during the season. Michelisz would also move up in the standings to finish fourth overall with 222 points.

Team Principal of BRC Hyundai N Squadra Corse Gabriele Rizzo said: “Incredible emotions! After 2018 with Gabriele and 2019 with Norbi, this is the third win of a drivers’ title for the team which makes it three out of five. This is the first teams’ title win in WTCR for us after finish second twice before. It really is the icing on the cake of an incredible season. It has been a long journey since 2017 developing the Hyundai i30 N together with Hyundai Motorsport Customer Racing, then clinching the two drivers’ titles before two seasons without titles and a change of car model from the incredible i30 N to the superb Hyundai Elantra N TCR. I really believe we have reached a great level with the full package: strategies, drivers, qualifying performance, and race consistency. We have really put everything together this season. An impressive show of strength and thanks to all, Mikel, Norbi, Nicky, Davide, the other two Gabriele’s, the engineers, mechanics, our partners, sponsors, all the people of our company at home, and obviously all Hyundai Motorsport Customer Racing. For their superb customer service and it was fantastic that they were able to attend this weekend with all the key people from Alzenau and Korea. It is a great honour for us to celebrate these two titles with them.”

Mikel Azcona said: “It’s been a very nice weekend, super emotional, getting the title in qualifying in Q2. Race 1 and Race 2 were a bit difficult honestly, starting P3 in the first one and going backwards to P6 because we were missing top speed but in the end our pace was very good. Honestly no chance to overtake here in Jeddah. Second race I was very surprised, we were lucky and had some incidents in front of us, so we gained some positions. I tried my best to go for P2 but the car in front was too quick. It was a very good way to finish the season like this in a podium position, so it is a great feeling.”

Norbert Michelisz said: “Both races went well for me, I really wanted to win the first one, but with my start I was not able to take P1. To be honest from there I really did my best, but the pace was not enough to pressurise Berthon. In the end, I think it was the maximum for me to finish P2, happy with the points and the podium. Race 2 was very tricky at the beginning, my start was good, and I managed to overtake one or two cars, but then it was also a bit of luck, choosing the lines and going through the field. The Hyundai Elantra N TCR was working very well, we made some good improvements. It’s a shame to have finished under the safety car as I think we had good pace. But still finishing P3 and P4 is a good result.”

Nicky Catsburg said: “Race of Saudi Arabia was a very interesting one. We won the two titles, both the teams and the drivers so a fantastic result. For me personally it was a difficult one. Qualifying went well and Race 1 was kind of okay, but Race 2 should have been my race. I think I was going to go for a win or a podium, but unfortunately got t-boned out of the race. I must say in general, a super nice weekend for all of us, very proud to be a super small part of it.”